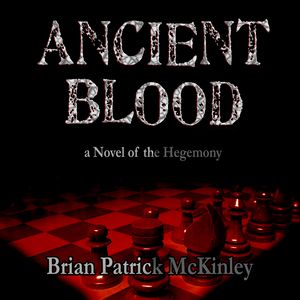 Now out on Audible and Amazon, Ancient Blood: A Novel of the Hegemony, Book One of the Order Saga.

This is my first narration in the Fantasy genre and I am quite excited about it. I will warn my long-time listeners, this book is squarely in Rated R territory. Avery Doyle loves vampires; he’s read every novel, seen all the movies, and researched the folklore. When his first one-night-stand, Caroline, turns out to be a true vampire on the run, he jumps at the chance to leave his ordinary life and join her as a “child of the night”. The honeymoon ends, however, when Caroline’s brutal Creator Sebastian enslaves them on his island estate and Avery must confront the dehumanizing reality behind his dreams. In order to survive, Caroline and Avery take their place as servants in Sebastian’s household during a gathering of the most powerful vampires on Earth, the Hegemony, and soon find themselves involved in the myriad intrigues and deceptions that form the night-to-night existence of The Order. A society of wealth, power, and inhuman decadence whose existence is protected by human complicity and disbelief, The Order is the immortal aristocracy hidden behind the giant corporations and political leaders of the world. Sebastian, however, has a plan that will change The Order forever and shatter human civilization. To avoid this terrible fate, Avery and Caroline will not only have to defy the most powerful creatures on Earth, but also confront the darkest aspects of themselves. For in the world of the Hegemony, even victory may cost them their souls… A fast-paced thriller that both re-imagines and pays tribute to the traditional vampire, Ancient Blood is a story of love, ambition, sacrifice, and betrayal that is frighteningly human.

It’s my longest narration to date and probably (I need to actually count) has the most accents and voices of anything I’ve done.